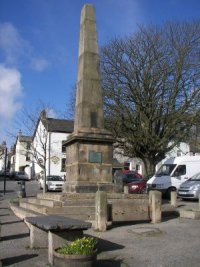 Broughton some history and today

Broughton today...
Broughton today is a thriving small market town with a specialist butchers and grocers, an artisan bakery, and several fine hostelries, all nestling alongside the Broughton Information Centre.
Its location and proximity to good transport routes allows easy access to Coniston and the heart of the Lake District.
Farming was, and some may argue still is, the mainstay of community life, and sheep farming is still an important activity in the valleys.
A cattle market is still held here on alternate weeks. Herdwick sheep, then as now, still graze the upland commons.
Broughton-in-Furness was the focus for much rural activity. Local trade in wool, cattle, iron ore and copper mining and woodland products built up a thriving town, which was granted its Market Charter in Elizabethan times.

On 1st August every year, a proclamation is read out from the steps of the Obelisk, warning all to keep the Queen's peace and not to short-change customers. Those that infringed the rules used to be placed in the adjacent stocks. Nearby are the original slate fish slabs where sea fish from Haverigg and freshwater fish from local rivers were sold on market days.
The Market Square, where the Obelisk stands, was designed by John Gilpin Sawrey, the Lord of the Manor in 1760, in imitation of the elegant Georgian squares of London.

The obelisk at its centre was placed there to commemorate the golden jubilee of George III in 1810.

The Town Hall, dating from 1766, was once the Market Hall and now houses the Broughton Information Centre and a craft gallery.
The Roman road over Wrynose Bottom, at the head of the Duddon Valley, can still be traced. The rocky promontory of The Hawk, near Broughton Mills has been identified as a Romano-British settlement. Historically, the occupants of this area took what they needed from the land in order to survive. Attractively banded slates were quarried from Walna Scar (slate is still quarried today at Broughton Moor and Kirkby Moor) and ores of iron and copper were dug out and smelted in local furnaces
Woodlands were worked to provide charcoal as fuel, bobbins for the textile mills and to make oak swill baskets - a locally important industry.

click
©2021 Broughton Information Centre Ltd is powered by WebVilla
Cookies are set by this site. To decline them or find out more visit our cookie page

Please support us in campaigning against the construction of national infrastructure scale pylons in the Lake District, including the beautiful Whicham Valley and Duddon Estuary. National Grid has an alternative offshore subsea route. Please add your voice to ours, and don't let them take the easy option. See www.powerwithoutpylons.org.uk to read more, Like, Follow and sign the petition.

©2021 Broughton Information Centre Ltd is powered by WebVilla
Cookies are set by this site. To decline them or find out more visit our cookie page